One of the many maintenance tasks that we've acquired along with Blackthorn is caring for her engine, a 25 hp diesel Betamarine. Changing out the fuel filters had long occupied the top of my most "put off" maintenance tasks. Important Note: These are not comprehensive instructions for doing a fuel filter change. This is just me sharing our experience and some of the things we learned along the way.

What do the fuel filters do? Or, perhaps less obviously, why does the fuel need filtering? There are a few reasons. The most obvious: You acquired fuel with impurities at a dock somewhere. This is less likely to be an issue when you're buying fuel in heavily trafficked port like Tacoma than when you're in an obscure port. Water can condense at the top of your fuel tanks, especially over the winter, and diesel is also capable of supporting bacterial growth. Fuel filters and water separators work to ensure that as little of that contaminated fuel reaches your engine as possible.

Our engine has a fuel filter built into it, and secondary fuel filters in the fuel lines provide additional protection. A part of routine maintenance is changing the fuel filters at the designated time intervals or engine hour marks. It's not supposed to be a big production, but for two people who had never tackled the task, it was a bit intimidating. After all, one of the last things you want to do is break the thing that gets your boat in and out of port.

At least a month ago, I decided to finally get down to it. I dug out our spares and opened up the engine box, only to realize that some of our spare fuel filters had accumulated a fine film of rust, and we didn't even have a replacement for the built-in filter. It was a spectacular false start that set us back a while.

Once I'd actually acquired all of the parts, I set to replacing the fuel filters. I'd read through the Betamarine manual and a portion of Nigel Calder's Boatowner's Mechanical and Electrical Manual. The Sir was there to lend a hand, but I was the lead on this little project.

The process of changing the filters is relatively simple:


That last step is the big, scary one. If you aren't careful, you can seriously damage your engine or have an engine that just won't turn over. We read about burning out glow plugs and forcing saltwater into your cylinders. The engine is one of the most valuable things on our boat, and even if we can afford to replace it, getting it in and out of the boat would be an absolute nightmare.

What supplies did we use for this little project?


*** We didn't have this, but if you're ever doing this yourself, we really, strongly recommend not ignoring this one. Read on to learn why!


A Step at a Time

Stage one of this project involved finding the fuel shutoff valve. Our system gravity feeds out of a day-tank, so it wasn't too hard to find, though it also wasn't in a very visible location. 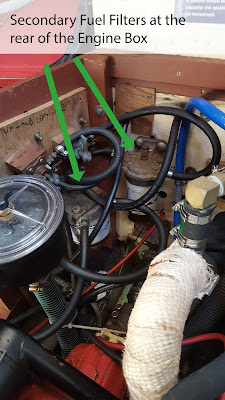 Then, we set up the puppy pads below where we were working. Even though it would be fairly simple to perform this job without dripping at all, we always err on the side of caution. Our Racor fuel filters have a small clear cup at the bottom, where you can see water accumulating. On each cup is a small screw valve that can be used to drain the filter. So, we put a jar under the filter and unscrewed it so that the filter could empty out.

With the filter empty, we unscrewed it (by hand) and took it outside, over another puppy pad. The fuel that we had drained off was in quite good shape. We unscrewed the filter from the reusable cup, and attached the cup to our new filter, and wiped some diesel on the new seal. Without fresh diesel, we decided to pour the diesel that was in back into the filter. This is when I made a pretty foolish mistake.

The drain on the bottom of our water separator cup does not tighten down all the way to seal it. Instead, it is set up so that it seals while it is somewhat "unscrewed" looking. They set it up so that it's still a lefty-loosey, righty-tighty system, it just doesn't look like it. And... I overthought it, so that the fuel we poured in went straight through the filter, out the bottom, and onto the puppy pad. It was not one of my finer moments, but we averted any major disasters. We cleaned up our mess and got the new fuel filter screwed back in, hand tight.

The next filter had a different issue. No matter how we screwed or unscrewed the little cap on the water separator, it wouldn't drain. I began to think that maybe there was suction in the system preventing the fuel from draining, but there shouldn't really be, since the other filter had been removed already. We eventually got the thing off and discovered that some sediment had settled in the drainage holes, effectively plugging it. Once it was cleaned up, it functioned as expected.

With the two secondary filters out of the way, we moved onto the primary filter. This one was just a little black cylinder with no water separator. We unscrewed it, wiped some diesel on the replacement's gasket, and screwed it back on to the specified tightness.

A few tips for installing filters that I picked up from my very mechanically inclined dad:

With our new fuel filters in place, it was time to get the air out of the lines. We turned the fuel shutoff back on. There's the low pressure part of the fuel system which was the part we were messing with. The high pressure portion goes to the injector heads on the engine block, and according to all my reading, that was the "scary part." So, we started with the low pressure system. This involved unscrewing a little bolt (the bleed screw) on top of the primary fuel filter about two turns and then operating the engine's manual priming lever. This tiny lever lives low on the engine, and the picture that we found in the manual didn't really make it clear exactly which of the many engine parts it was. So, when I tried to "turn" the lever, I actually turned a valve that started draining liquid out (this turned out to be the coolant drain). We were not off to a good start. 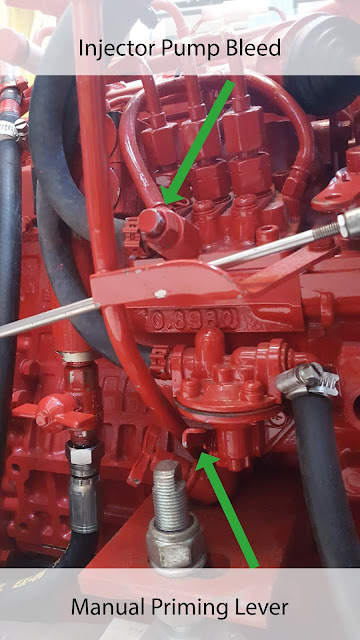 After a minor scramble for paper towels, we located the actual lever, which, with a bit of finagling, we got to move past the engine's mounting bolts.  So, we set to pumping. And pumping. 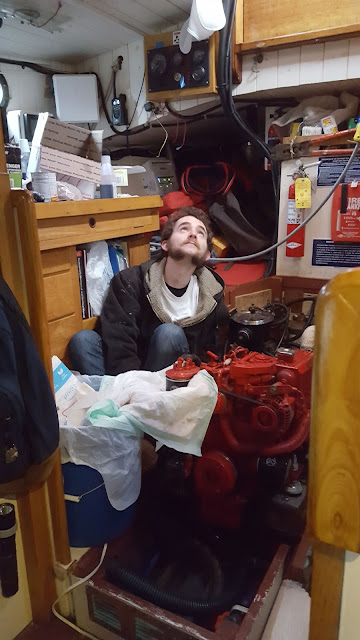 And... questioning everything, and then pumping some more. The Sir sat there, pumping this lever for an hour, and then two hours, and still, nothing was coming out of the bleed screw. I was afraid that the little pump had lost its pressure when I'd opened the valve and was doing absolutely nothing. 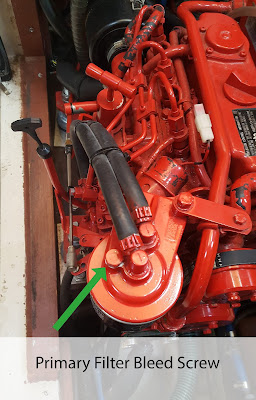 After about two hours of The Sir pumping this tiny, stupid lever, we closed the bleed screw for the night (in case we actually had created a siphon that would slowly fill) and went to bed.

I was not feeling great at this point in time. I was the point-person on this particular project, and we now had a non-operable engine. There was no way it would work with air trapped in the lines, and the puzzle of how to get fuel into the empty lines with the supplies at hand was not one that I was looking forward to solving.

We bumped into a person at the marina who had a lot of experience with diesels on the way to the bathroom that morning and picked his brain for a few minutes. He suggested filling the primary fuel filter through the bleed screw at this point, as he'd had success with that before.

The Sir pumped on the little lever for a while before I fully unscrewed the bleed screw and looked into the fuel filter. I couldn't see any fuel there. It seemed like pouring some fuel in couldn't really hurt at this point, so we drained a bit of fuel through the cup on the bottom of one of the secondary filters, and tried to get it down the little screw hole with a turkey baster that we used for diesel. It kind of went down the hole, but mostly bubbled up a lot. We carefully mopped up the fuel, tightening down the bleed screw some. It bubbled and bubbled for several minutes, pausing occasionally. When the Sir tried pumping, there didn't seem to be a correlation, and eventually, the screw would just leak fuel when it was opened. We weren't sure if what we'd done had worked, but it seemed likely there would still be some air in the system.

At this point, we did a lot of reading about starting up the engine. Worst case scenario, there was a lot of air in the system that we still needed to bleed out, but there were guides on how to deal with this. We decided to see what would happen when we started it up. The engine turned over, ran for about 10 seconds, and died. According to what we'd read, it was probably a pocket of air trapped in the lines. We had read about how attempting to repeatedly priming the engine without successfully starting it could fill the raw water exhaust system and eventually cause the water to intrude into the cylinders: Because the water was not being expelled as exhaust and was not compressible, it could destroy an engine. With this in mind, we began each attempt to start the engine with the seacock closed initially.

I cracked the bolt on the injector pump open until fuel flowed out. This was the farthest down the low-pressure system that we could bleed. While this was open, The Sir continued pumping the little lever, just in case it actually was working. We ensured that the bolt was tightened back down before proceeding.

With fuel appearing to be in the lines, we tried starting the engine up again. It turned over and started running, not entirely smoothly. We opened up the raw water seacock and let the engine run, wary that this might not be the end of our troubles. The engine ran smoothly for about 15 minutes before we shut it back off.


All Said and Done

We struggled some, we made some mistakes, but we've managed to work our way through one more challenge and learned a lot more about our boat in the process.


Thank you for taking the time to read through, and I hope you found some useful tidbits! If you have any questions for me, or just want to hang out with some cool folks, feel free to hop on the Creaturista Discord server!
Labels: Boat Stories 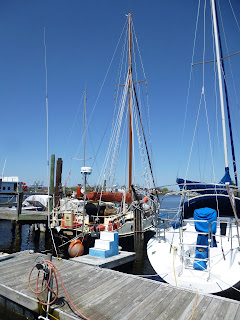 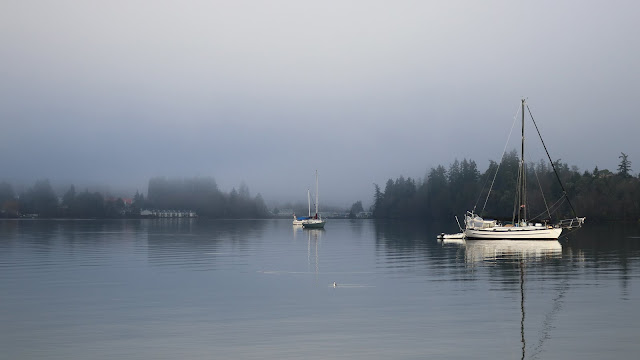